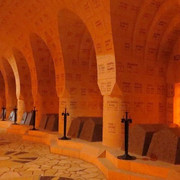 On November 11, 1918, World War I hostilities came to an end. And as we know, Remembrance Day honors soldiers who have died in wars and conflicts. A visit to the Verdun area in north-eastern France is moving and worthwhile, as this is where some of the conflicts on the Western Front of World War I took place.

The losses were enormous and there are many WWI cemeteries and memorials to visit; however, one of the most striking is the Douaumont ossuary. Douaumont Ossuary, Verdun An ossuary is a container or site that contains the remains of human skeletons. The Paris Catacombs are an example of an ossuary containing the remains of over 6 million people beneath the streets of Paris.

Battle of Verdun The Battle of Verdun in World War I lasted 300 days (21 February 18 December 1916).There were 700,000 casualties and 230,000 dead. It was the biggest battle of the First World War. Memorial to soldiers The Douaumont ossuary, at the gates of Verdun, houses the remains of French and German soldiers who died on the battlefield. The most shocking and saddening thing for me was seeing the unidentified skeletal remains of 130,000 soldiers through the small windows of the ossuary.

The view is gloomy as the bones are in huge heaps in each of the 42 niches. The ossuary was inaugurated on August 7, 1932 by French President Albert Lebrun and in addition to the huge piles of bones, inside the ossuary are plaques with the names of many (but not all) of the soldiers French dead at the Battle of Verdun. There are also plaques naming soldiers who fell during World War II and the wars in Indochina and Korea.