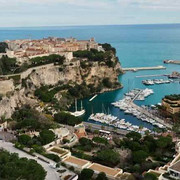 Arriving in Monaco, I strolled around the area near the casino, enjoying the view of the harbor and surrounding area. I had been to Munich several times in the past where I visited the casino, had a drink at the Hotel de Paris and looked at the windows of the expensive boutiques.

It was time for something new. I headed west to the Exotic Garden. It’s only about a mile from the casino and takes about 25 minutes. The garden of Monaco is full of exotic plants and breathtaking views The garden was founded by Prince Albert I of Monaco and designed by Louis Notario, chief engineer of Monaco.

It took 20 years to create this magnificent garden perched on a cliff and opened to the public in 1933.With the addition of the botanical center, the prehistoric museum of anthropology and the cave, it is not an orthotic garden, though.Being on the edge of a cliff, the scenario is constantly amazing.

Botanical Center In the 1960s a large greenhouse was added to the property and in 2017 it was moved in front of the Exotic Garden. The Botanical Center protects and nourishes 10,500 cacti and other succulents. A team of 7 specialized gardeners ensures that the plants, many of which are rare and endangered, are well attended. Guided tours are available.